What Rob Cullum did with his prize money… 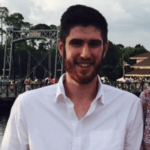 Rob was voted the winner of the General Practice Zone in November 2017. Here he writes about how he used his prize money to create a series of videos in partnership with Lincolnshire Talent Academy answering questions students might have when considering applying for medical school.

If you’d like the chance to win funding for your own public engagement work, sign up to hear about the future I’m a Medic activities  imamedic.uk/healthcare-apply

I used the money to create a series of videos to answer the kinds of questions people considering medical school frequently have. The videos all feature current medical students from the Universities of Nottingham and Leicester and cover topics such as money, personal statements and general advice. They are being hosted on the Lincolnshire Talent Academy YouTube channel and promoted via social media. They are accessible to anybody.

The project has taken me longer than expected to complete, both because recruiting students to take part was challenging, but then also I wanted to get a wide range of students involved to give a breadth of opinions and experience. Getting the videos edited also took longer than expected. This said, now they are done, I am really happy with the outcome and I think they will prove a useful resource for students thinking about applying.

Posted on August 27, 2019 by in News, Winner reports. Comments Off on What Rob Cullum did with his prize money…